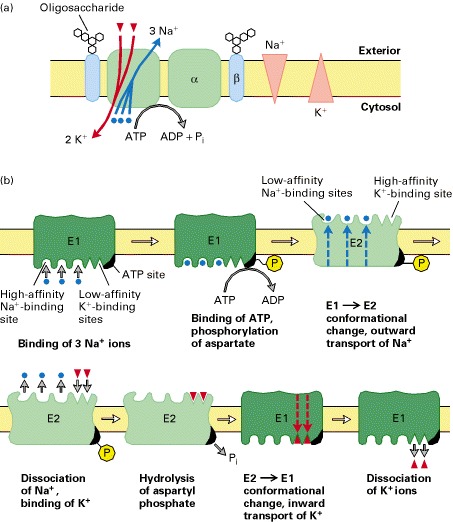 The Na+/K+ pumps are found in the neuronal plasma membrane and are a type of primary active transporter[1]. The role of the Na+/K+ pump is to maintain the electrochemical gradient of Na+ and K+. The Na+/K+ pumps are a type of ATPase they use the energy produced from the spliting of the ATP via hydrolysis to actively transport Na+ out of the axon and pump K+ into the axon. The Na+/K+ pump is a carrier protein, thus requires a change in conformation in order to move the ions across the membrane, for every 3 Na+ pumped out there are 2 K+ that have been pumped in. The Na/K+ pumps establish a resting potential of -70mv, this is a negative voltage as the outside of the cell is more positive than commpared with the inside of the cell. The Na+/K+ pump is described as being electrogenic as it creates a change in electrical potential within the cell[2].

How An Na+/K+ Pump Works