Amino acids are the building blocks of proteins - they create the proteins primary structure. There are 20 naturally occurring amino acids. Amino acids exist in proteins as L-optical isomers, however, they can exist as D-isomers in isolated examples, e.g. some bacterial cell walls contain D-isomers. When two amino acids join they form a peptide bond. This bond works as a partial double bond causing the amino acids to have cis/trans isomers. Although most commonly found in trans.

Amino Acids are the monomers that make up proteins by joining in condensation reactions to form peptide bonds between themselves. When an Amino Acid is part of a protein it is known as an Amino Acid residue, it has the same side chain but it's alpha Amino and carboxyl groups are now part of peptide bonds. All amino acids have an alpha carboxylic acid group, an alpha amine group and a hydrogen atom bonded to a central carbon along with a fourth variable group. This group varies in the 20 essential amino acids and generally allows amino acids to exhibit sterioisomerism to create optical isomers D and L. The only exception to this being the simplest amino acid glycine with its variable group being another hydrogen atom. This prevents sterioisomerism as there aren't four different groups then bonded to the central carbon - there is no chiral centre[1]. 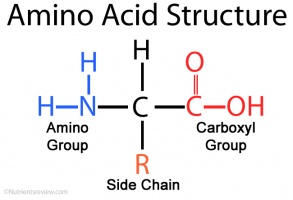 Amino acids are referred to as chiral due to the alpha carbon being connected to four different groups. They can exist as one of two mirror images referred to as the Levorotatory L isomer and the Dextrotatory D isomer with only the L form of the amino acid isomer present within proteins[7].

Amino acids in solution at neutral pH exist predominantly as dipolar ions, or zwitterions. In the dipolar form, the amino group is protonated, and the carboxyl group is deprotonated. The ionization state of an amino acid varies with pH[8]. A series of amino acids joined by peptide bonds form a polypeptide chain, and each amino acid unit in a peptide is called a residue. Two amino acids can undergo a Condensation reaction to form a dipeptide, accompanied by the loss of a water molecule[9].

The common amino acids are grouped according to their side chains[10]. For example, acidic, basic, uncharged polar, and non-polar.

Proline is also known as an amino acid. which is commonly found in animal proteins. It is not essential to the human diet, since it can be synthesized in the body from glutamic acid [11]. Unlike other amino acids that exist in the transform in polypeptides, proline can exist in the cis-form in peptides. Proline is often found at the end of α helix or in turns or loops[12]. Proline is the only cyclic amino acid. This is due to Proline having an odd, cyclic structure when it forms peptide bonds, it induces a bend in the amino acid chain. Therefore, proline is also known as alpha helix breaker ( the other alpha helix breaker is Glycine)[13].

During the translation of mRNA, amino acids bind to the ribosome as it reads the mRNA and using the information given it produces a specific amino acid sequence producing a polypeptide chain. The 30S subunit binds to the mRNA first, and the 50S subunit binds second to form the 70S initiator complex[14].

The amino acid Cysteine has many applications and plays an important role in protein structure. This is mainly due to its thiol group. The thiol ( made up of a sulphur and hydrogen atom) is very susceptible to oxidation, allowing cysteine to form disulphide bonds with other molecules including other cysteines. The resulting product of two linked cysteines is called cystine. When bound to other cysteines, the disulphide bond greatly increases the stability of the protein. However, as this is an oxidation reaction, it is exclusive to extracellular proteins with a few exceptions. This is because the inside of the cell is highly reducing making the disulphide bond highly unstable.