Anaphase is the stage of mitosis and meiosis where genetic information is moved to opposite poles of the dividing cell. In mitosis, with spindles joined to centromeres and the sister chromatids lined up on the metaphase plate, one chromatid from each pair is pulled to either side of the cell. There are two stages of anaphase in mitosis. Anaphase A, where chromosomes move to the poles, is followed by anaphase B, where the poles move apart. Anaphase occurs twice in meiosis (Anaphase 1 and 2). Anaphase 1 involves the separation of the chromosomes in each bivalent to opposite sides of the cell. Similarly to anaphase in mitosis, anaphase 2 involves the actual splitting of sister chromatids to single chromatids. 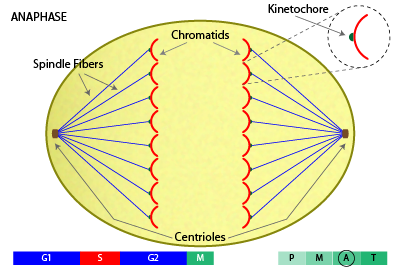