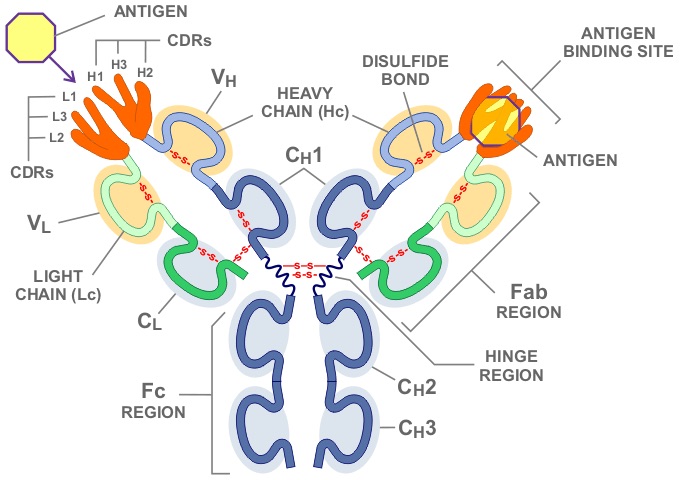 Antibodies are large glycoproteins secreted by B lymphocytes to help protect the body against infection. They bind with a high degree of specificity to molecular structures (antigens) on infectious agents. This can lead to enhanced killing of microbes by phagocytes or complement [1].

They can be segregated into 5 classes of Immunoglobulin; IgG, IgM, IgE, IgA and IgD; their class is determined by the type of heavy chain in the antibody with corresponding lower-case Greek letters (γ, μ, ε, α,and δ respectively). Each of them has a different distribution in the body. IgM and IgA are multimeric. The other three are monomeric antibodies. IgA exist as both multimeric and monomeric antibody in different tissues of the body. The classes differ in their structure and function.

Antibody molecules are in the shape of a Y, and all consist of three parts that are connected together by disulphide bonds in order to form this Y shape. Antibodies are also made up of a two polypeptide chains; a heavy chain and a light chain. All immunoglobulin molecules contain heavy and light chains that are identical, giving rise to two identical antigen-binding sites.The light chains of the immunoglobulin molecule are categorised as lambda or kappa. Any of the light chains can be associated with any heavy chains but one immunoglobulin molecule can only have either kappa or lambda chain, not both[2].The synthesis of either kappa or lambda light chains is known as isotype exlusion which occurs as a consequence of allelic exlusion[3].The stem of the Y is a constant region composed of only heavy chains. The ends of the arms of the Y form variable regions composed of heavy and light chains. The constant regions can be used to distinguish between the 5 classes of immunoglobulins while the variable regions 'vary' between different antibody molecules. This variable region binds to the specific antigens and is made up of six hypervariable loops. Three of these come from VL (variable light-chain) and three from the VH (variable heavy- chain) regions. Between these regions exists more stable FR (framework regions) which make up the rest of the variable region. They provide stability to the antibody and when folded into secondary structure provide a scaffold to anchor the HV regions in place[4]. Specificity depends on the amino acid sequence in the hypervariable region. In contrast, the CH (constant heavy-chain) is used to interact with effector cells and complement.

The VL and VH domains are highly variable in their amino acid sequence forming a unique antigen-binding site or paratope[5].The hypervariable regions that form the antigen-binding site are therefore also called complementarity-determining regions (CDRs)[6]. Analysis of the three-dimensional structure of Abs performed by X-ray crystallographic techniques proposes that the mechanism for antigen-binding is the induced fit mechanism at the CDR.

The hinge region is a segment of the CH chains. Since Ags are able to have epitopes at non-adjacent sites, the hinge region is critical for the flexibility of the Ab, thus allowing the two antigen-binding sites to act independently[7].

Through amino acid sequence analysis, homology regions were found which are referred to as 'homology domains'. The L chain comprises 2 domains and the H chain can have either 4 or 5 domains. Each domain is around 110 amino acids in length, comprised of two beta sheets, linked by a disulphide bridge. It is worth noting domains are also paired - folded units within the protein.

Antigen-binding sites bind to epitopes on the antigen. The epitope can be linear (continuous) or conformational (discontinuous)