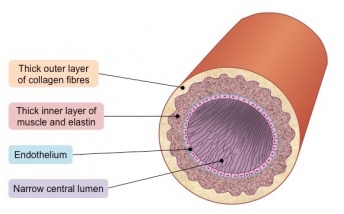 Like all major blood vessels, arteries consist of a layer of endothelial cells, a layer of smooth muscle cells and a layer of collagen. However, arteries are distinguished from other blood vessels because their smooth muscle layer is comparatively thicker than in veins. This is so that the blood, which is pumped from the heart at higher pressure, won't lose the pressure as it reaches the capillaries and allowing for efficient material exchange in the tissues. The total wall thickness of arteries is around 1.0 mm and internal diameter of around 4.0 mm, with the exception of the Aorta, which has wall thickness of 2.0 mm and internal diameter of 25.0 mm[1].

Aterioles are small branches of arteries, and control the blood which is sent to capillaries. These are an important part of the arterial system[2].

The outer layer of an artery is called the tunica adventitia, which comes into contact with surrounding organs in order to protect the artery from wear. The inner layer is called a tunica intima has a smooth epithelium so that friction is reduced which is caused by blood flowing through the artery. The tunica media is the thickest layer and contains smooth muscle for contraction, to allow blood to flow through the artery[3].