There are 3 Types of Gene Transfer in Bacteria[1]. namely:

"Transformation is a process by which recipient calls acquire genes from free DNA molecules in the surrounding medium".

In other words, this is the transfer of genes from free DNA molecules in the surrounding medium into a recipient cell.

Transformation starts the uptake of a DNA fragment from the neighbouring medium by the recipient's cell and ends with one strand of donor DNA substituting the homologous segment in the recipient DNA. It has to be noted that even amongst cells of a species that is generally capable of transformation, only some cells in a growing population are efficient in the uptake of the free genetic information.

The main experiment linked to this was Griffith's work with smooth virulent (Deadly) strain of Streptococcus pneumonia and rough (non-deadly) strain on Mice. The smooth appearance of the deadly colony is caused by a carbohydrate coating on the surface of each cell, which acts as protection against the mouse's immune system and therefore allows the colony to thrive.

When the smooth strain was treated with heat it was killed and so when injected into the mouse it was not deadly.

However, when the 'Heat-Killed' smooth strain and the rough (non-deadly) strain were mixed and injected together the mouse contracted pneumonia. Since neither were able to kill the mouse on their own, this shows that the smooth strain has 'TRANSFORMED' the rough strain so it becomes deadly when they are mixed. In other words, the rough strain cells had taken up free DNA of the 'killed' smooth strain (specifically the gene that codes for a carbohydrate capsule) and had produced a protective coating around themselves thus, appearing 'smooth'.

For transformation to occur, the recipient cell has to possess 'competence' which is the ability to take up free DNA fragments by an organism. Competence occurs naturally in some bacteria but only under certain conditions, often in response to a lack of nutrients. Competence can be induced in bacteria when it does not naturally occur by treatment with calcium chloride CaCl2 and a heat shock, as is the case with Escherichia coli. Calcium chloride makes cell walls leaky so they are more permeable to the free DNA while heat shock encourages the cells to uptake this DNA.

Transference of genes via direct cell to cell interactions.

This method involves an exchange of Plasmid DNA. 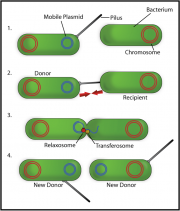 The donor cell unwinds it double stranded DNA plasmid and one of the strands are transferred from the donor to recipient. After which both cells separate and synthesise (Semi-conservative replication) the complementary strand so that both donor and recipient cells now have identical plasmids.

The ability to form pili comes from the presence of a fertility or F factor; which is a molecule of DNA that codes for the genes to produce pili. The donor cell which has the F factor is considered to be the F+ cell and the recipient is considered the F- cell. Before the transfer of genes can take place, the F+ cell must first conjugate with the F- cell and transfer a copy of the F factor to it. This will then allow the formerly F- cell to conjugate and transfer genes because it has become a F+ cell[2].

Sometimes, however, the plasmid DNA may combine with the genomic DNA of the host cell before conjugation. The new recombinant cell is called HFr (High-Frequency recombination). When the sex pilus connects the host and recipient cells, single-stranded DNA goes from the host to the recipient. However, only some of this genomic and plasmid DNA pass on to the recipient cell because the cells separate too soon. This means that all the host cells will not necessarily be HFr or F+. They will still be F-. The remaining single-stranded DNA in the host cell replicates its DNA by a mechanism known as rolling circle mechanism[3].

Bacteriophages (Virus) inject cells with viral DNA which then infects the cell causing the cell to produce new phages and break open, releasing the new phages which then infect other cells. Occasionally when the new phages are being packaged with the viral DNA, host cell chromosmal DNA may be packed in error; such phages are called 'TRANSDUCING PARTICLES''.These phages infect other (recipient) cells, injecting host DNA instead of viral DNA into it; the host DNA is then incorporated into the recipients chromosomal DNA, causing it to gain new genes

Bacteriophage can be easily detected because they form plaques in a bacteria growth. In the absence of phages, bacterial cells will grow and form a translucent lawn. However when a phage is introduced the bacteria will become infected, replicate more phages, and eventually undergoing cell lysis. This lysis will release the phages into the medium and soon the surrounding cells will also become infected, causing cell lysis to occur in these as well. The bacteria in a localised area will all die (lyse) and create an area where no bacteria exist. These areas are known as plaques.