The amount of light passing through a substance is called transmittance, T or percent transmittance (%T), and is defined by the following equation:

Where Io is the intensity of the incident light and I is the intensity of the absorbed light. The amount of light of a specified wavelength absorbed by the substance depends on the length of the light path through the substance. The negative logarithm of the transmittance, the absorbance (A), is directly proportional to the amount of light absorbed and to the length of the light path and is described by the Lambert law, which is expressed as follows:

Here b is the length of the medium, usually a solution in a cell, and K1 is a constant. 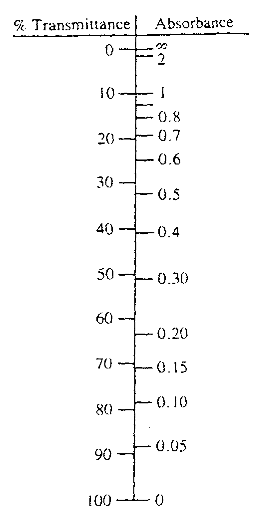 The negative logarithm of the transmittance (absorbance) is also directly proportional to the concentration of the absorbing substance c and is expressed by Beer law as follows:

Combining the two laws as the Lambert-Beer law gives the equation:

DETERMINING THE WAVELENGTH OF MAXIMUM ABSORPTION FOR A SUBSTANCE

To use the Lambert-Beer law to determine the concentration of a substance, light of a specified wavelength must be chosen. A spectrum of the pure substance, that is, the absorbance of the substance as a function of the wavelength of the incident light is necessary. This is most easily obtained using a recording spectrophotometer with a double beam, which is able to scan the wavelengths and thus identify the wavelength(s) of maximum absorbance.

Quantitation of an unknown concentration of a substance in a given biological fluid is nearly always carried out by construction of a standard curve. In spectrophotometry, like many other analytical techniques, the instrument response (absorbance) is plotted against known concentrations of standard solutions. A plot of the absorbance versus concentration should give a linear curve whose slope is the extinction coefficient when the cell length is 1.00 cm.

To plot a standard curve a linear curve (straight line) is drawn to best fit the scatter of data points as shown below: 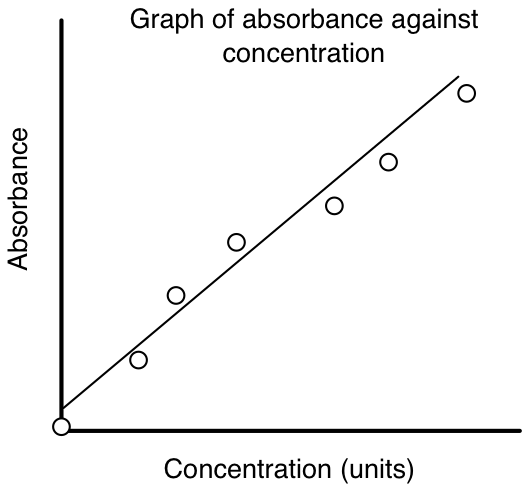 When drawing a curve it is important that you: