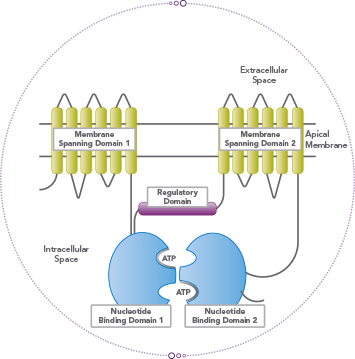 Cystic Fibrosis is a disease condition caused by several mutations in the gene encoding CFTR protein, which normally functions as a Cl- channel in the plasma membrane of epithelial cells. The CFTR channel plays a particularly important role, especially in the lungs, where it controls certain ion concentrations found in the extracellular fluid [4]. The disease causes decreased chloride concentration in the airway which leads to the thickening of the gel layer. As it thickens it becomes too heavy for the cilia to brush it along and so sticks to the cilia. Many organs become affected by Cystic Fibrosis, which disrupts their normal functioning. A major problem is encountered in the lungs, where there is clogging of the bronchial passage and infection. The repeated inflammation to combat infection damages lung tissue, so breathing is impeded and lungs are slowly destroyed. In the liver, disease affects digestion, as it plugs in the small bile ducts. In the pancreas, a precipitate forms in ducts to the bowel, meaning that digestive enzymes cannot be transported and digestion is insufficiently processed, leading to malnourishment. Other organs which are altered by the disease are the small intestine and the reproductive duct. In the small intestine thicky stool forms and clogs the ducts which sometimes even necessitates surgery, this is mostly seen in newborns. Females are occasionally affected by thick mucus stopping the passage of sperm to uterus thus making them infertile. Congenital absence bilateral absence of the vas deferens occurs in most of the males, when the vas deferens (testes) is absent or isn't properly formed, which results in infertility[5].

Currently, the main method of diagnosing cystic fibrosis is by analysing a sample of sweat from the patient. The eccrine cells are found all over the body and secrete a solution of sodium, chloride and water. Sodium chloride (NaCl) is reabsorbed from sweat through ENaC and CFTR channels in the epithelial cells of the eccrine duct as it travels towards the skin surface. As the duct is fairly impermeable to water, there is little osmosis; the solution that is eventually secreted from the lumen is hypotonic. In cystic fibrosis, CFTR is non-functional and so there is little chloride re-absorption at the apical membrane. The build up of the negative chloride charge in the duct impedes the diffusion of sodium. Sodium chloride is therefore trapped in the lumen and excreted in sweat, resulting in high ionic concentrations (>60mmol chloride concentration) in CF patients [6].