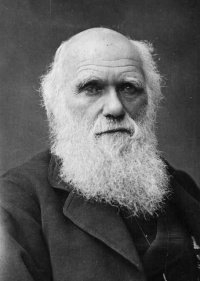 English naturalist, founder of the modern evolutionary theory. He spent 25 years gathering facts about evolution[1]. In 1831, he participated on a five-year voyage for collecting specimens from all over the world. Finally, he published ‘On the origin of species’ in 1859.

He collected specimens all over the globe, from the greatest diversity and he could examine a wide variety of plants, animals and fossils. Based on his experiments, he believed that all species have evolved from common ancestors[2].

After years, Darwin observed that variations appeared by natural selection, which is a continuous change of a species to become more adapted to the environment, while less favourable variations are less likely to survive. This can lead to the appearance of new species.

His revolutionary theory about the origin of living organisms has been confirmed after his death.