Chiasma or crossover refers to the visible point where paired maternal and paternal homologous chromosomes join during meiosis 1 and then crossover. This recombination occurs when a segment of one paternal chromatid is replaced by the complementary form of the other maternal chromatid [1].

There are 2 nuclear divisions in meiosis, and a chiasma forms in the first division of meiosis 1. The duplicated homologs align with each other and swap genetic information (recombination).

Crossover happens between 2 non-sister chromatids. The chiasma can be seen during the diplotene stage, at the point where the homologs join in prophase 1, when the synaptonemal complex disassembles and begin to separate. They crucially hold the compact homologues together[2]. The frequency of crossing over varies, with the occurrence in humans being at least once in each chromosome arm. 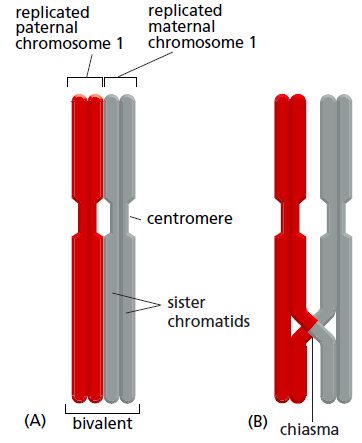