There are two types of cilia; motile and primary, and they tend to be around 10um in length and around 0.2 µm in diameter[1]. Motile cilia grow in clusters e.g. the cells in the bronchial epithelium, primary cilia grow as a single cilium e.g. those on the embryonic node. Motile cilia are found on a limited range of different cell types whereas primary cilia are found on nearly every cell in the human body. Primary cilia's function is to receive signals from other cells or fluids. 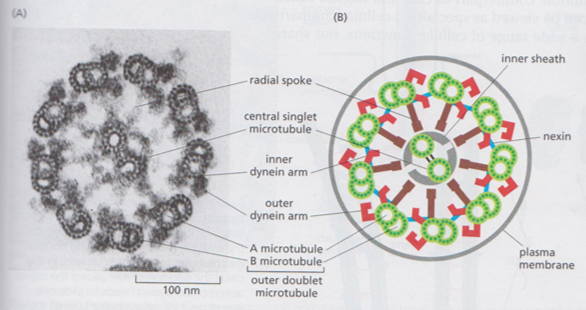 Cilia (singular: Cilium) are cylindrical organelles[2][3], built from microtubules, in a “9 + 2” arrangement[4], with 9 doublet microtubules surrounding the circumference and a central pair in the middle. The microtubules are regularly cross-linked with accessory proteins to make up the axoneme, a central core that provides stability. Certain accessory proteins such as dynein (see Figure 1) play a key role in the organelles movement. The 9 doublet microtubules around the circumference consist of one complete and one incomplete tubule, which are shared by common tubule wall. The organelle is also anchored to the cell membrane by the basal body, which is composed of triplet microtubules that transition into the doublet ones seen in the axoneme[5]. The majority of cilia in different eukaryotes have this characteristic arrangement[6]. They are motile structures whereby the rhythmic beating of cilia creates movement. Cilia are involved in mucociliary clearance in which bacteria, mucus and dust are swept up the respiratory tract into the mouth and eliminated by swallowing. Moreover, ciliated cells move oocytes along the fallopian tubes, and sperm from testes into the male reproductive tract[7]. Furthermore, by the beating of cilia, single cells are able to propel through fluid[8]. The movement of cilia is caused by axoneme, which can reach a length of 10-200 micrometres[9]. Dynein is a cytoskeleton motor protein within cilia which enables them to have movement. This occurs by the conversion of chemical energy in ATP to mechanical energy[10].

Cilia can also be immotile (primary cilia) and have a “9+0” arrangement where they have 9 peripheral doublets microtubules and 0 single microtubules in the centre[11][12]. One of the roles of primary cilia is to act as a sensory antennae on receptor cells, they extend out from the apical surface of the cell into the surrounding medium and are able to detect the presence of ligands better than receptors on the cell surface due to the fluid further away from the cell membrane being more mobile[13].

Primary Ciliary Dyskinesia (PCD) is a genetic disorder caused by abnormal cilia and flagella, which can lead to respiratory tract infections. Some of the symptoms of this disorder include a chronic cough, nasal congestion and chronic chest infections. In people with PCD, the cilia found in the respiratory tract are immobile and stiff due to defects in the axonemal dynein. This means they cannot move the mucus away, so the bacteria remain in the respiratory tract and cause infection. Although there is no cure, PCD can be treated with antibiotics, anti-inflammatory drugs or a bronchodilator and more importantly regular exercise is required to help clear the airway[14][15].