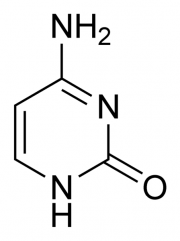 It forms complementary base pairs with guanine (G) with three hydrogen bonds. This means that fragments of DNA and RNA rich in Guanine-Cytosine (GC) pairing have higher melting points than those richer in Adenine-Thymine (AT) pairing, as Adenine (A) and Thymine (T) only bond with two hydrogen bonds.

In deamination mutations, Cytosine (C) loses an NH2/amine group and becomes uracil (U), an RNA base which base pairs with adenine (A). The complimentary strand at this gene loci will now have an adenine (A) where it originally had a guanine (G) so the base sequence has changed. These kinds of mutations cause SNPs (single nucleotide polymorphisms); single base changes in the sequence of a gene that may change the amino acid coded for and, therefore, the structure of the protein expressed. This simple structural change to Cytosine (C) can have drastic effects as the protein synthesised may be non-functional [1].

It was originally discovered via hydrolysis from the thymus tissue of a cow, performed by Neumann and Kossel in 1894. Almost twenty years later, in 1903, a possible structure was suggested and then confirmed through synthesis [2].