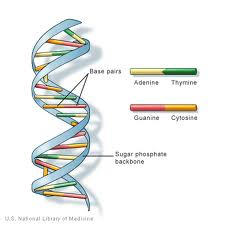 DNA is a chain of monomers (repeating units) called "nucleotides". A nucleotide consists of: a 2` deoxyribose sugar (A five (pentose) carbon sugar  similar to that of ribose sugar found in RNA. Its chemical formula is C5H10O4), a phosphate group (contains one phosphorus atom, bonded to 4 oxygens and forms a phosphodiester bond, which connects 2 deoxyribose sugars together resulting in the formation of a chain) and a nitrogenous base (one from A, C, G or T, which forms a side chain branching from the 2` deoxyribose sugar).