The channel is trimeric, ie. it is made of three homologous subunits called α, β and γ, all which must be co-expressed for the channel to be able to work. 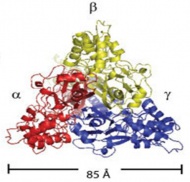 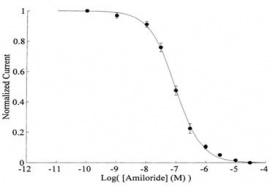 <- The first few points of the curve on the far right-hand side, are the experiment with each of the three subunits separately. Then moving onto combinations of two subunits and finally all three which gives the best response.[2] 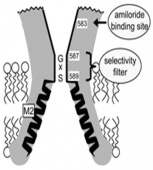 The ring in between subunits α, β and γ determines the selectivity of the channel.

Amino acids 587 to 589 (glycine to serine) make up the selectivity filter.

Amino acid at position 583 (serine) is the amiloride binding site. 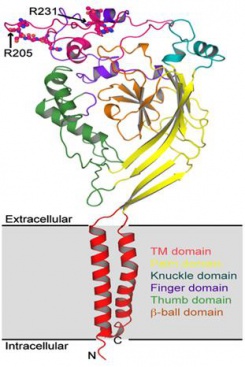 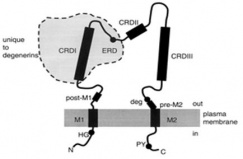 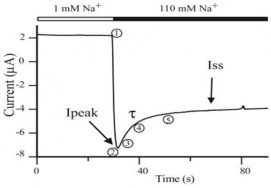 An increase in the external Na+ means there is a direct increase in the Na+ moving into the cell but only to a certain extent after which ENaC intrinsically down regulates and inhibits itself using its tertiary structure, leading to a decrease in the open state probability (O.S.P) and the Na+ influx becomes steady.


2 – Activation of ENaC by proteolitic cleavage


2 – Hormone Control
The steroid hormone aldosterone increases the insertion of ENaCs into the membrane and their open state probability but usually not the channel’s synthesis unless in the colon. When blood pressure and volume in the body are low, the RAAS system will be activated by Renin release from the juxtaglomerular cells in the kidney in response to low afferent tension and Na+ flow. As this eventually results in a production of aldosterone, ENaC activity will increase and more Na+ will be retained so osmolarity and volume increase, resulting in an increase in blood pressure that returns it back to a normal range. 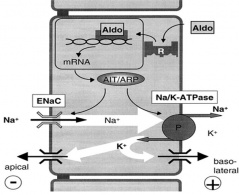 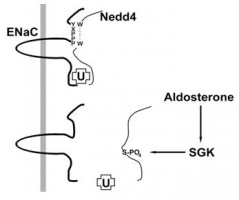 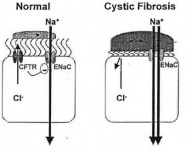