Eukaryotic cells also contain a cytoskeleton, which holds the cell organelles in place, and cytosol, which is a fluid that surrounds the organelles. Eukaryotic cells are surrounded by cell membrane, which is made of a dynamic phospholipid bilayer. The membrane also contains numerous proteins, glycoproteins and cholesterol to add structural support. Unlike prokaryotes, eukaryotes contain organelles which are bound by a phospholipid membrane[2]. 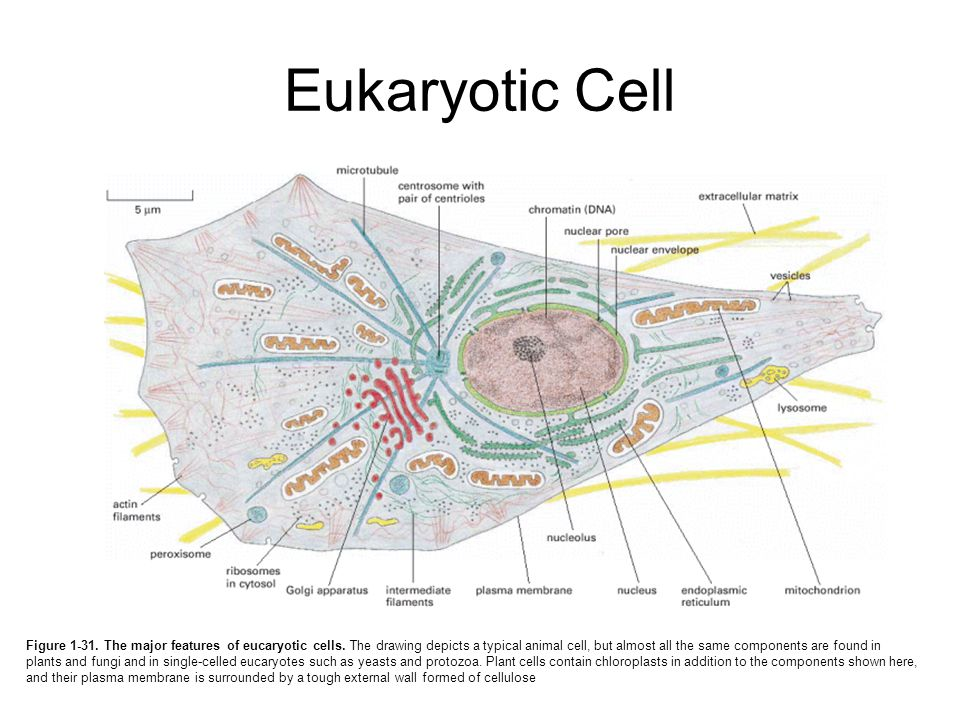 Most of the organelles inside the cell are surrounded with a membrane which segregates its activity from the surrounding environment.

The Golgi apparatus gathers simple molecules and combines them to make molecules that are more complex which then get packaged them in vesicles, and either stores them for later use or sends them out of the cell. It builds lysosomes. The structure of the Golgi apparatus can be described as a series of flattened sacs. The Golgi is polarised and it has a cis and a trans face. The cis face is nearer the endoplasmic reticulum and the trans face is near the plasma membrane.

Mitochondria are vital organelles that provide energy for the cell to carry out all its functions, for example, division. Mitochondria have double membranes, with the outer membrane fairly smooth, and the inner membrane folded into cristae, which greatly increases the surface area. It is on these cristae that sugar is combined with oxygen to produce ATP - the primary energy source for the cell.

The nucleus controls all functions of the cell and contains genetic information in the form of DNA, and its associated protein, histone, which forms chromosomes. The nucleus is bounded by a double membrane, called the nuclear envelope. Within the double membrane nuclear envelope are passages which large molceules can pass through called nuclear pores. Each Nucleus contains one or more nucleolus; the site of ribosome synthesis.

Cell wall is present in fungi and plant cells, and exists around the outside of the plasma membrane. In fungi peptidoglycan forms the cell wall and in plants, the strongest component of the cell wall is a carbohydrate called cellulose. Cells walls provide structural support and have no affect on the passage of molecules and ions into and out of the cell.

This structural support comes from the cellulose-containing polysaccharides of glucose, attached by 1,4 glycosidic bonds which are covalently linked together, further stabled by hydrogen bonds. Layers of these residues can also be hydrogen bonded together which form strong form chains, or myofibrils[6].

Chloroplasts are present in all plants and algae. Like mitochondria, they have double membranes and are thought to be descended from free-living prokaryotes. The chloroplast contains thylakoids, which are chlorophyll-containing membranes. These membranes use light as the catalyst for photosynthetic reactions.

The cell cycle of eukaryotic cells has two major phases: the interphase and cell division.

During the cell division phase, the nucleus divides in a process called mitosis and then the divided nuclei are established in separate cells in a process called cytokinesis. Each daughter cell produced will be genetically identical to that of the parent cell. The process of meiosis is a two-stage process where, in the first stage, the cell divides as it does in mitosis. Then the cell divides again (without the chromosomes replicating again, regardless of another interphase between the two stages) which is when the sister chromatids get pulled apart. The daughter cells that are the outcome of this are not identical to the parent cells and are in fact haploid of the parent cells. These cells are called gametes, and when two gamete's nuclei fuse together during reproduction, is when a diploid number in chromosomes is regained.