A definition of a hominoid is as follows: a primate of a group that includes humans, their fossil ancestors, and the great apes.[1]. Additionally  a definition of evolutionary genetics is the study of how genes and genomes have changed over time. Evolution itself is the theory of every species descending from a last universal common ancestor (L.U.C.A), respectively we can map the common ancestors of different species on the evolutionary tree of life. Therefore the evolutionary genetics of hominoids is trying to organise the species within the hominoid group into the order in which they have evolved based of how close or distant the relationships between the various members are. There are many ways in which we can do this:

One key method involves the comparison of DNA and genes. This technique uses the principle of random mutagenesis in order to establish how closely related species are. If two individuals of the same species with similar genetic sequences are isolated from one another and prevented from interbreeding for an extended length of time each genome would acquire different mutations and thus speciation occurs. The original species would be the common ancestor and this group of organisms would be known as a clade. After a length of time the DNA of the two resultant species could be sequenced and the amount of genetic difference between the two groups would help determine how closely related the progeny are. As humans, the species which has the most similar genomic DNA to us is the chimpanzee with only approximately 4.2% of our genomes differing[2]. This implies that if we examine the DNA of a human, chimpanzee and a cow there would be fewer differences between the chimpanzee and human sequences. Reversely there would be greater difference between the human and cow DNA.

Process
DNA hybridization is a very basic analytical technique which quickly shows how closely linked the genomes of two different species are. Firstly we require the DNA of the species we wish to compare.
1. We heat treat the DNA of every species in order to obtain only single, unpaired strands of DNA.
2. We can then mix the single stranded DNA of one species with the single stranded DNA of another species. The universal nature of DNA would result in annealing of the separate strands, producing hybrid DNA (DNA with single strands from different species).
3. We use this hybrid DNA and find the temperature at which it completely denatures. The process of denaturing DNA is using heat energy to overcome the hydrogen bonds which hold the strands together.

Interpretation of the results. If two strands are of a complementary sequence they will have a high melting point due to the maximum number of hydrogen bonds being formed; for example DNA molecules in which both of the strands are from a human. On the other hand, if the melting point is fairly low this suggests little similarity between the sequences as there are fewer hydrogen bonds and fewer complementary base pairs. To illustrate this point:
• A DNA molecule compromised of one human strand and a strand from the DNA of a cow will have a much lower melting point than a molecule compromised of one human strand and one chimpanzee strand.
Experiments of this nature were used to figure out that genetically, chimpanzees are more closely related to humans than they are to gorillas.

Determination of evolutionary relationships based on species morphology.

A definition of morphology:

“noun (plural morphologies)
• 1 [mass noun] the study of the forms of things, in particular:.
• the branch of biology that deals with the form of living organisms, and with relationships between their structures.”[3] 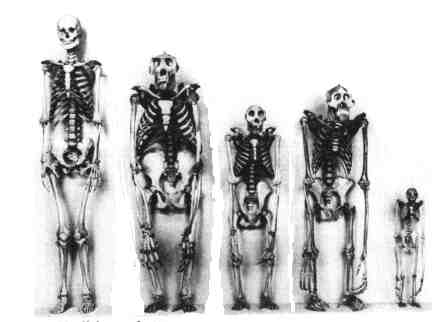 Figure 1 shows the remains of five primates. From our previous genomic comparisons we have determined that the chimpanzee (centre) and the human (furthest left) are more closely related than it is to the gorilla (second from left). Now we ask the question, is this evident in the morphology of the species? When considering the form of the primates presented in figure 1, the gorilla seems to be more closely related to the chimpanzee. The distance between the tips of the fingers and the ground in both the chimpanzee and the gorilla is significantly shorter than in humans. Thus fossil records can often be misleading when determining the relationships between species. This is even more substantial when studying the fossils of microscopic organisms or species that are very old as generally the reliabiity of fossil records decreases with age. In the process of finding fossils the species may not have been well preserved through the handling of multiple paleontologists and other professionals.