More information is available on how prokaryotes carry out cell reactions, with the model organism beingE.coli&nbsp;which has its whole genome sequenced,is &nbsp;easy to grow and can be genetically modified. Bacteria use lactose as an energy source when glucose is in limited amounts. Researchers used X-gal, a coloured compund, to observe that in the presence of glucose, a few&nbsp;β-galactosidase molecules were present, whereas with lactose, 1000's of&nbsp;β-galactosidase were presnt. This suggested that levels of enzyme expression changed with changes in environment and his was co-ordinated by an expression unit called an&nbsp;operon.<ref>Berg,J.M, Tymoczko,J.L, Stryer, L, 2007, Biochemistry, 6th ed., W.H. Freeman p 897</ref>&nbsp;More specifically, thelac operon is made up of a regulator gene which codes for the repressor, an operator site and structural genes z, y and a. 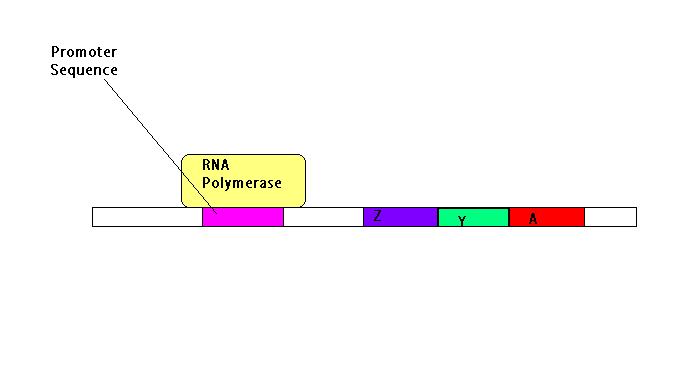 The RNA polymerase binds onto the promoter which consitutes of a -35 sequence TTGACA, a -10 sequence TATAAT , both upstream of the start site ( TG/ AT). The sequences are known as consensus sequences as they produce maximum efficiency transcription. RNA polymerase is Mg<sup>2+</sup> dependent and has a core made of 2&nbsp;α, 1β, 1&nbsp;β'&nbsp;and 1 ω subunits.<ref>Andersen-Lykke,J, Christiansen,J, 1998,Nucleic Acid Research,Oxford Journals, [online] 26 (24) Available at: naroxfordjournals.org/content/26/24/5630.full [accesses 2 December 2011]</ref>&nbsp;The core combines with a&nbsp;σ<sup>70</sup>&nbsp; to form a holoenzyme, with the sigma factor&nbsp;makeing sure that RNA polymerase binds to correct DNA&nbsp;sequence.<sub></sub>