DNA is transcribed into mRNA which translates into protein. Gene expression uses the information from a gene to produce a protein. It is believed that eukaryotes, prokaryotes and archaea undergo gene expression, with speculation still going on about viruses. Bacterial transcription is very reliant on promoter regions at the beginning of each gene. Promoter regions act as the DNA regulatory elements through which transcription is initiated and controlled.

Gene activity is mainly controlled by the transcription level. Genes that are always being expressed are said to undergo constitutive expression and those only expressed conditionally undergo regulated expression[1]. Gene expression control involves the interactions between DNA, DNA binding proteins and regulatory proteins. Both eukaryotes and prokaryotes use RNA polymerase to initiate transcription which binds to specific binding sites on DNA called promoter sequences. Whilst prokaryotes only require a single DNA polymerase for transcription to occur, the process is more complex in eukaryotes and requires RNA polymerase I, II and III. Regulatory proteins either repress or activate transcription. RNA Polymerase stops transcribing at the terminator sequences, two forms of termination exist.

More information is available on how prokaryotes carry out cell reactions, with the model organism being E. coli. An organism which has its whole genome sequenced, is easy to grow and can be genetically modified. Bacteria use lactose as an energy source when glucose is in limited amounts. Researchers used X-gal (a coloured compound which acts as a false substrate) to observe that in the presence of glucose, a few β-galactosidase molecules were present, whereas with lactose, 1000s of β-galactosidase were present. This suggested that levels of enzyme expression changed with changes in the environment and this was coordinated by an expression unit called an operon[2]. More specifically, the lac operon is made up of a regulator gene which codes for the repressor, an operator site and structural genes z, y, and a. 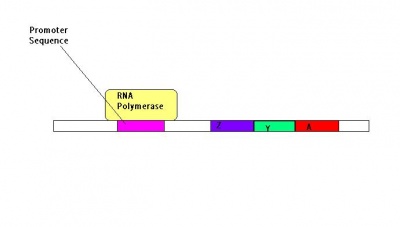 The RNA polymerase binds onto the promoter which constitutes of a -35 sequence TTGACA, a -10 sequence TATAAT, both upstream of the +1 start site (TG/AT). The sequences are known as consensus sequences as they produce maximum efficiency transcription. RNA polymerase is Mg2+ dependent and has a core made of 2 α, 1β, 1 β' and 1 ω subunits[3]. The core combines with a σ70 to form a holoenzyme, with the sigma factor making sure that RNA polymerase binds to correct DNA sequence.

In eukaryotes, instead of the sigma factor recognising the TATA box, you have GTF's (General Transcription Factors). The GTF's form a PIC (Pre Initiation Complex). TFIID recognises and binds to the TATA box, TFIIB makes direct contact with RNA polymerase and dictates where transcription begins. In eukaryotes, you have activators which bind to upstream activator sequences, which help to stimulate PIC assembly. Eukaryotic activators have a DNA binding domain and an activation domain. The activation domain helps to activate transcription[4].