Haemoglobin (also hemoglobin, or abbreviated Hb) is a protein which is used in red blood cells to store and transport oxygen. It is found in many multi-cellular organisms such as mammals where simple diffusion would be unable to supply adequate oxygen to tissue and cells.

Haemoglobin is made up of four polypeptide subunits, two alpha (α) subunits and two beta (β) subunits. Each of the four subunits contains a heme ( contains iron) molecule, where the oxygen itself is bound through a reversible reaction, meaning that a haemoglobin molecule can transport four oxygen molecules at a time.

The reversible nature of the binding of oxygen allows for both the uptake of oxygen in the lungs and its release in body tissues.

The heme molecules each contain a single central iron atom and are responsible for giving the red colour to haemoglobin, and thus to the blood as a whole. [1]

The four subunits of Hemoglobin are similar to myoglobin [2]. Myoglobin is a single polypeptide, existing in either the deoxymyoglobin form (not bound to oxygen) or the oxymyoglobin form (bound to oxygen)[3]. Myoglobin contains heme[4]. Heme contains a central iron atom surrounded by protoporphyrin, which is the organic component[5]. When O2 binds to the iron atom (the iron must be in the Fe2+ state for O2 to bind), the iron atom actually moves from outside of the plane of the porphyrin to within the plane of the porphyrin[6].

The binding of O2 in hemoglobin is cooperative, meaning that the binding of O2 in each of the one subunit is not independent of the binding at other subunits[7], so as one oxygen binds to a heme group it causes conformational changes to the other heme groups making them more accesible to oxygen, thus leading to the successive binding of other oxygen atoms[8]. Even though myoglobin has a higher affinity for O2 than hemoglobin, hemoglobin is more effective and efficient at delievering oxygen to tissues. In lungs, 98% of hemoglobin is saturated, whereas in the tissues, only 32% of hemoglobin is saturated[9]. This means that in the tissues, 66% of hemoglobin subunits released their oxygen. In contrast, in lungs, 98% of myoglobin would be saturated, and 91% of myoglobin would be saturated in tissues[10]. Compared to myoglobin, hemoglobin has a much more complete. Hemoglobin has a T and R state. In the T (tense) state, or deoxygenated state, the binding sites of hemoglobin are constrained. In the R (relax) state, or oxygenated state, the binding sites are less constrained, making it easier for the hemoglobin subunits to bind to oxygen [11]. There are two models that attempt to explain the cooperativity of hemoglobin. The first model is the concerted, or MWC model. This model proposes that whenever an O2 molecule binds to a subunit of hemoglobin, it shifts the equilibrium between the T and R states. According to this model, when none of the hemoglobin subunits are bound to oxygen, the T state of the protein is favored. As more and more sites are bound to oxygen, the reaction shifts to favor the R state. A transition from the T state to the R state will increase the binding affinity of the other sites for O2. The sequential model, on the other hand, suggests that you don't have to have a conversion from the T state to the R state to increase the affinity of other binding sites. A mixture of both models explains what is observed about hemoglobin cooperativity better than either one of these models can achieve on its own. It is observed that when 3 out of 4 subunits of hemoglobin are bound to O2, the protein is almost always in the R state. Another observation is that when 1 out of 4 hemoglobin subunits are bound to O2, the protein is almost always in the T state[12]. 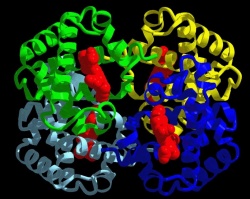 Haemoglobin (also spelled Hemoglobin and abbreviated Hb or Hgb) is a respiratory pigment, which transports oxygen essential for cellular metabolism.

Each polypeptide is associated with haem, which is the prosthetatic group that mediates reversible binding of oxygen by haemoglobin. It contains a ferrous (Fe2+) ion. Each Fe2+ ion can combine with a single oxygen molecule (O2), making a total of four oxygen molecules that can be carried to the tissues and return carbon dioxide (CO2) from the tissue to the lungs.[14]


The cell that produces haemoglobin is called an erythrocte (also known as RBC, red blood cell). Each red cell contains about 280 million molecules of haemoglobin.[15]

Haemoglobin (also spelled hemoglobin) is iron containing compund that binds to oxygen gas. It is found in the red blood cells of vertebrates. It transports oxygen from the respiratory organ, the lungs, to the different cells of body. It is a protein that contains a quaternary structure made up of 4 sub-units. They consist of 2 alpha sub units and 2 beta subunits. Each subunit conatins a heme group which contains and iron atom. Each iron atom binds to 1 oxygen molecule. Thus 1 haemogobin molecule transports 8 atoms of oxygen. When absorbtion of oxygen occurs haemoglobin becomes oxyhaemoglobin and it forms the reddish colour of the red blood cells. Upon arrival at a cell it deposits its oxygen thus allowing oxidization of glucose to take place via respiration. This releases energy in form of ATP. The waste product, carbon dioxide is transported by haemoglobin to the lungs for expiration [16].

Haemoglobin also acts as a buffer that helps maintain the physiological pH. It has a histidine group that can uptake H+ ions when the pH decreases and dissociate to release H+ ions when pH increases[17]. When it works together with the lungs, it is able to control the uptake of carbon dioxide which controls the bicarbonate buffer system thus being able to sustain the physiological pH.