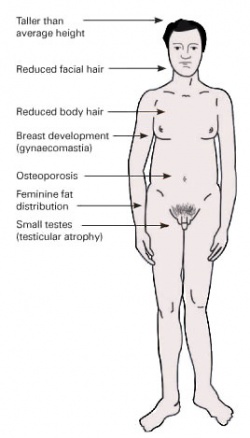 The karyotype of a normal human male is 46XY[1]. If an individual has two or more X chromosomes then he is said to have Klinefelter syndrome[2].

An individual with Kleinfelter syndrome has a male phenotype[3], however, they also possess a number of traits which are absent in a karyotypically normal male which is symptomatic of the disorder.

Behavioural signs in developing boys include:

Although all but 1 X chromosome is condensed into a Barr body, this is incomplete and some genes are expressed on both X chromosomes; males with Klinefelter produce more X linked genes that normal males resulting in a different phenotype. However, the symptoms are not as severe as other trisomies as most of the extra X chromosomes are silenced.[9].