The Last Universal Common Ancestor, or LUCA, is the name given to last common ancestor of Earth's current life. It is believed to be the first living organism from which both Prokaryotes and Eukaryotes decended. In the Universal SSU rRNA Tree of Life, the phylogenetic tree shows that the LUCA organism occurs just before the basal split in the tree into the two main domains, Bacteria and Archaea. The evidence provided for the need of another organism before the basal split into Bacteria and Archaea, is through analysis of rRNA sequence comparisons[1]; as even though they both have the same size  ribosomes of 70S, there are still differences within the genetic code of specifically 16S rRNA which is enough to classify them in different taxonomic groups[2] 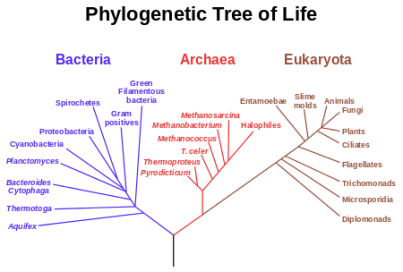