Microtubules are a component of the cells cytoskeleton , which is responsible for vital cell functions, such as cell structure, shape, and transport.

Microtubules are 25 nm in length and 14 nm in width, making them the largest cytoskeletal filaments found in eukaryotic cells[3].

Microtubules have different functions. They are most commonly found as cilia and flagella . Cilia, which are short, hair -like structures, are found in place s such as t he trachea and fallopian tube . T he cilia are attach 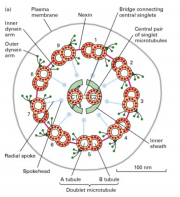 Screen Shot 2017-12-04 at 11.40.37.png
ed to the basal body and stick outwards of the cell surface, where they beat back and forth. This assists the removal of mucus in the trachea , and allows for an egg cell to move through the fallopian tube[4] . In flagella, microtubules form the long tail, which is necessary for sperm cells to propel themselves towards egg cells for fertilisation .