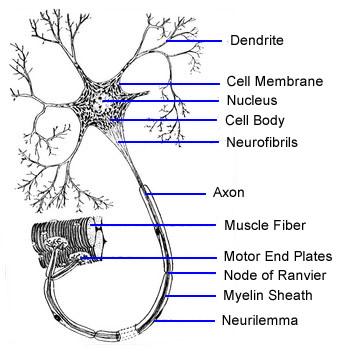 The cell body contains the nucleus and most of the usual organelles. Dendrites are responsible for conducting of signals inward to the cell body; beginning near the axon hillock, the axon transmits signals outward. Breaks in the myelin sheath, known as nodes of Ranvier, are concentrated regions of electrical activity. Each segment of the sheath consists of a concentric layer of membranes wrapped around the axon by a Schwann cell. Each discontinuous myelin sheath around their axons insulate them electrically, therefore the electrical current which is traveling along the axon jumprs from one node of Ranvier to another.