A protein is a biological polymer which is made up of structures called amino acids. The amino acids are joined together with a peptide bond to form a polypeptide chain. The peptide bond is formed by joining the ɑ-carboxyl group of an amino acid to the ɑ-amino group of another amino acid[1]. A protein can be made up of a single polypeptide chain or multiple polypeptides linked together. There are three types of proteins: fibrous, globular and membrane proteins. Examples of proteins include enzymes, receptors and hormones. They are found in every form of life from viruses to bacteria; yeasts to humans. One important technique used to analyse proteins is SDS polyacrylamide-gel electrophoresis (SDS-PAGE). Proteins can make up to 50% of the weight of a cell, and up to 25% of a human's dry bodyweight.

A protein has several 'layers' of structure[2]. The function of the protein is determined by its structure. Therefore each layer is dependent on the next[3]. 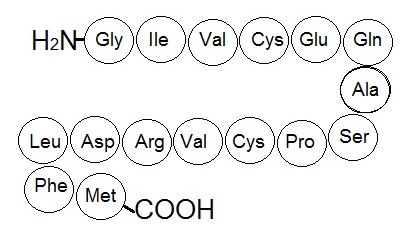 Example of primary structure of a protein[4].

Secondary structure is the first level of protein folding. The two main folding structures of a protein are the alpha-helix or the beta-sheet depending on the sequence of amino acids. Alpha-helix can exists as right-handed or left-handed while beta-sheet can exists as anti-parallel or parallel. This, in turn, allows the protein to have a hydrophobic core and a hydrophilic surface. The secondary structure is stabilised by hydrogen bonds between the C=O and H-N groups[5]. for the peptide backbone.

Proteins make up 50% of each cell and have both structural and functional importance. Proteins transport a multitude of different particles from macromolecules to electrons. Enzymes are globular proteins that act as biological catalysts, and collagen is a fibrous protein which provides strength and structural support in many tissues. Proteins in the form of hormones transmit information between specific cells.

Enzymes work by binding substrate at their active sites, which is a specific region dependant on amino acid sequence forming an enzyme-substrate complex. This causes a conformational change in the shape of the enzyme which encourages catalysis by putting a strain on the bonds in the substrate (and/or by other means).

A group of protein structures called motor proteins are responsible for activities such as muscle contraction, cell movement, migration of Chromosomes during Mitosis and the direction of organelles. There are two different types of microtubule motor proteins known as kinesins and dyneins. Kinesins facilitate the carrying of organelles toward the positive end of the microtubule and dyneins are important of the movement of cilia or flagella in organisms[8].

A protein molecule's physical interaction with other molecules determines its biological properties. In some cases, these interactions are very strong; in others, it is weak and short-lived. But the binding always shows great specificity, in the sense that each protein molecule can usually bind just one of a few molecules out of many thousands of different types it encounters[9].

Protein synthesis can be divided into two sections, transcription and translation. In transcription DNA is used to code for the protein, it starts at a promotor gene at the 5' end one of the two DNA strands, here RNA polymerase, which does not require primers, moves down the strand and forms a complementary sequences of pre-mRNA. (Thymine base is replaced with Uracil) This pre-mRNA contains non-coding introns and coding exon, due to this, the pre-mRNA is spliced to remove the introns leaving only the coding sequences of mRNA. This mRNA is used to code for the protein sequence.

In translation the mRNA binds to a ribosome, this ribosome then moves down the mRNA from the 5' to 3' end. tRNA has an anticodon sequence with three bases on it that are complementary to a codon on the mRNA, it also carries a specific amino acid. Here the RNA carries this amino acid to the ribosome and its complementary triplet code on the mRNA. Peptide bonds are formed between amino acids next to each other ( when their two triplet codes are next to each other)[10]. This forms the primary structure of proteins which is the amino acid sequence.