Skeletal muscle (also known as striated muscle) which acts under voluntary muscle contraction, is attached to the bone by tendons, and functions to carry out movement and help in maintaining body posture. It is made up of actin and myosin proteins which make up the sacromere, as well as the regulatory proteins troponin and tropomyosin. Contraction of a skeletal muscle is stimulated by the release of calcium ions from the sarcoplasmic reticulum which bind to troponin and cause a conformational change. This change causes tropomyosin to be released which causes the myosin-binding site on the actin molecule to become visible and so myosin can bind to the actin, causing a cross-bridge to form and the muscle to contract.

The myofibrils within the skeletal muscle create an alternating banding pattern of light and dark striations due to the thickness of the myofibrils changing as the muscle contracts.

Skeletal muscle is the main muscle type in our body and makes up approximately 40% of our total body weight[1]. 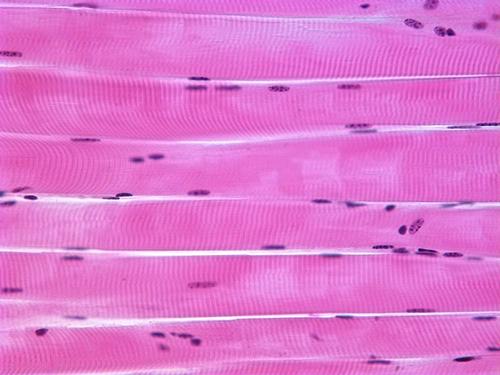 A skeletal muscle consists of muscle fibres. Each individual muscle fibre is surrounded by the endomysium, groups of muscle fibres are bound by the perimysium to form bundles called muscle fascicules and these fascicules are themselves bound together by a connective tissue called the epimysium[2]. One muscle fibre is about 100 µm in diameter, is multinucleate and contains many mitochondria. The multinucleate feature is established in myogenesis where hundreds or thousands of uninucleated myoblasts fuse together to form muscle fibres of up to several centimetres long[3].The number of muscle fibres remains constant in a man from birth - muscle building is achieved only by increasing the size of the muscle cells (each muscle cell is one muscle fibre). In the embryo, the membranes between newly differentiated muscle cells, called myoblasts, break down, thus forming muscle fibres with many nuclei. These nuclei are pinned randomly against the muscle fibre. Each muscle fibre contains lots of myofibrils which are lined up against nerve fibres and cause contraction of the muscle. These are approximately 1 µm in diameter.

The myofibril is organised in repeating units called sarcomeres. These contain thick and thin filaments; which are attached to Z discs and M lines, respectively. These thick and thin filaments, when viewed under a microscope, appear "striped" or striated. This appearance under the light microscope is the reason that skeletal muscle may also be described as striated muscle. The thick and thin filaments are made up of two different contractile proteins called actin and myosin. The actin filaments are the thin and flexible filaments while the myosin filaments are thick filaments. Thick filaments consist of the protein myosin II which forms a globular head and fibrous tail. The thin filaments are formed from G-actin monomers which polymerise to form F-actin[4]. Each G-actin has a myosin-heading binding site which is blocked during muscle relaxation by the protein tropomyosin. Tropomyosin winds around the F-actin in association with troponin. Troponin consists of 3 subunits; I, T and C. The I and T subunits bind to the tropomyosin blocking the myosin-head binding sites by holding the tropomyosin in position. The C subunit binds to calcium ions after their release from the sarcoplasmic reticulum during muscle stimulation. Muscle contraction occurs when the thin filaments slide along the thick filament by hydrolysing ATP[5]. by what is known as the Ratchet Mechanism, or Sliding Filament Theory. The myofibrils also contain the elastic proteins Titin and Nebulin which help the actin fibres return to their resting position in relaxation and keep the contractile proteins aligned.

The contraction in a muscle cell is propagated by an action potential travelling along a motor neurone and arriving at a Synapse; it is mediated by sodium ions. The voltage gradient causes voltage-gated calcium ion channels in the presynaptic neurone to open, triggering vesicles containing neurotransmitters, specifically acetylcholine, travel towards the sarcolemma; fusing with the membrane and releasing acetylcholine into the synaptic cleft[6]. They diffuse across the cleft where they bind to specific receptors called nicotinic cholinergic receptors on the sarcolemma, where the depolarisation travels along the membrane and deep into the cell via T-tubules[7]. The sarcoplasmic reticulum is enlarged where it comes into contact with the terminal cisternae and each T-tubule is in close contact with the cisternae of two regions of sarcoplasmic reticulum[8]. Therefore it allows the terminal cisternae of the sarcoplasmic reticulum to become depolarised, releasing calcium ions.The calcium ions bind to the C subunit of troponin on the actin filaments, the complex the moves tropomyosin, therefore, unblocking the myosin binding site, muscle contraction can then take place by the sliding filament theory[9]. 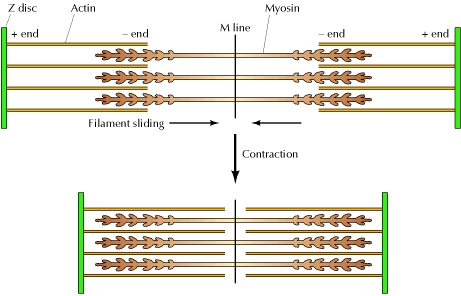 When an action potential travels through the sarcolemma and down to T tubule, Ca2+ is released from the terminal cisternae, the section of the sarcoplasmic reticulum closest to T tubules. This release of calcium ions increases the intracellular calcium ion concentration which leads to interaction between actin and myosin which in turn causes contraction of the cell[11].

Skeletal muscle fibre contraction uses the 'all or nothing' law - the fibre is either contracted or relaxed. However, the whole muscle contraction is a graded response (like smooth muscle cells) - the muscle can be partially contracted. This happens by changing the stimulation frequency, or by differing the number of muscle fibres being stimulated[12].

'There are three main types of skeletal muscle fibres; Type I, Type IIA and Type IIB. Our muscles have motor units of each of these types but some are found more in particular areas of our body than others.

Type I are also known as slow oxidative fibres. Their contraction time is slow and they are highly resistant to fatigue. They can generate ATP by aerobic respiration and fat is their main energy source. They are red in colour due to their high myoglobin levels. Type I muscles are mainly found in bodies of marathon runners[13]. In an average person's body, these muscle fibres are found in postural muscles (those that maintain posture), such as the neck[14].

Type IIA muscle fibres are also known as fast oxidative fibres. Their contraction time is fast and they are quite resistant to fatigue. ATP is generated by aerobic respiration and both fats and glucose are used as their energy source. These fibres are also red due to the high concentrations of myoglobin. Such muscle fibres are not very prominent in humans but do usually exist in bodies of athletes who do sports requiring a lot of stamina such as long distance running[15].

Type IIB muscle fibres are also known as fast glycolytic fibres. They contract very fast and are highly resistant to fatigue (so can only be used briefly). They obtain ATP from anaerobic respiration in which glucose is converted to lactic acid. Since they have minimal myoglobin, they are white in colour. Such types of muscle fibres are most useful for sprinters, as it requires a short burst of energy[16]. They are usually found in our arms[17].

After being determined from somites in a vertebrate embryo, Myoblasts go through Proliferation and a series of changes stopping cell division, and switching on muscle-specific genes related for terminal differentiation. Myoblasts then fuse together to form multinucleated muscle fibres. After Differentiation, a skeletal muscle cell will never divide again; the adult number of multinucleated skeletal muscle cells is gained before birth, instead, muscle fibres increase in size by cell elongation. To regulate its growth, muscle fibres secrete the Growth factor Myostatin[18]. If, however, the muscle cells do get damaged, small, flattened satellite myoblast cells are activated to proliferate and their progeny will be added to existing muscle[19].

Many isoforms of muscle cells can be created because their genome contains different copies of the genes encoding characteristic proteins and RNA transcripts. As our muscle fibres mature from fetus to newborn to adult different isoforms are synthesized to satisfy the changing demand for speed, strength and endurance[20].