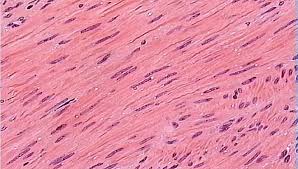 Contraction of smooth muscle is controlled by the autonomic nervous system, meaning its movements are primarily involuntary. However, as opposed to skeletal muscle, it can also be controlled by chemical and physical signals. This means that either an action potential is required to cause a change in membrane potential, or the opening of stretch-mediated ion protein channels; they both bring about contraction.[2]

Smooth muscle cell contraction is regulated by the calcium binding protein calmodulin. When there is an increase in calcium ion concentration, calmodulin attaches to caldesmon, which is an actin-binding protein. Caldesmon normally blocks the myosin-binding sites on actin filaments. As calmodulin attaches to caldesmon it releases actin, causing the myosin heads to bind to the actin filaments. The globular heads that protrude from the myosin molecule bind to the actin filament which forms crossbridges. The myosin moves along the actin and then releases from the actin (also requiring the use of ATP). Contraction is initiated by calcium-regulated phosphorylation of myosin[3]. Apart from calcium ions, smooth muscle activity can also be regulated by external signalling molecules, for example, adrenaline. When adrenaline binds to the receptor and changes its shape, this in turns alters the structure of the G- protein that binds to the receptor. This causes an increase of level of cyclic AMP inside the cell, which activates protein kinase. This then phosphorylates and inactivates myosin light chain kinase, eventually leading to relaxation of the smooth muscle. Smooth muscle contraction is significantly slower than skeletal muscle contraction. It usually takes nearly a second whereas skeletal muscle takes a few milliseconds[4].