Smooth muscle tissue is classed as non-striated due it is appearance and cells are located mainly in the walls of hollow organs such as the urinary, reproductive, intestinal and respiratory tracts of both females and males[1]. Contraction is much slower and can resist fatigue for much longer than other types of muscle. This is due to the lower rate of oxygen and energy consumption.[2]They also contribute to other major functions such as peristalsis and vasoconstriction. Due to the smooth muscle cell having many different functions the cells are organised into two groups. These are catagorized as:  multi-unit smooth muscles or single-unit smooth muscles. The majority of smooth muscle is of the single-unit type for simultaneous contraction within organs. 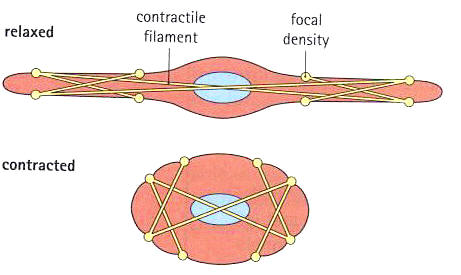 Smooth muscle cells can initiate spontaneous contractile activity without innervation using pacemaker potentials. Pacemaker potentials occur when the membrane depolarises itself due to changes in ion channel permeability and shifts in passive ionic flux. This self depolarisation then causes an action potential to be initiated thus activating the contractile mechanisms needed for the smooth muscle to contract. This type of nerve independent contraction is called myogenic activity and occurs within single unit smooth muscle cells.[8]