From The School of Biomedical Sciences Wiki
Jump to: navigation, search
The Cardiovascular System (also called the circulatory system) circulates blood around the body in order to supply all tissue with the required nutrients and 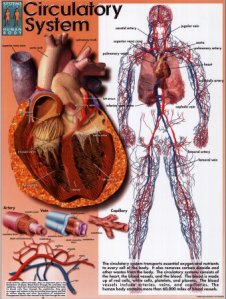 oxygen and remove waste products such as carbon dioxide[1]. Consequently it is crucial for homeostasis[2].

In order to carry out its functions, the cardiovascular system pumps blood through the blood vessels. This is done by the pumping of the heart. Furthermore, the circulatory system is associated with other systems in the body, for example, the lymphatic system[1].

Blood consists of white blood cells, red blood cells, platelets and liquid plasma. Plasma accounts for about 50% of the total blood content and consists mainly of which has glucose, proteins such as enzymesand hormones and waste products dissolved in it. Oxygen and carbon dioxide are also present in the blood and are carried by the red blood cells[1].

Within the human body, blood is carried in blood vessels which can differ in size and makeup[1].

Initiate from the heart and carry blood to organs and tissues where oyxgen and nutrients are needed. Therefore, they carry oxygenated blood away from the heart to the tissues. The diameter of the larger arteries can be altered by smooth muscle contraction and relaxation in order to maintain blood pressure, keeping the blood flowing. The smooth muscle in the walls of the arteries are controlled by the autonomic nervous system (ANS), which is part of the peripheral nervous system. The ANS acts unconsciously on the smooth muscle, allowing rapid contraction/dilation of the vessels in response to many different factors such as blood pressure and heart rate. Thick walls, muscular (see cardiac muscle), and elastic layers ensure that the strain due to the blood flow and the contraction of the heart does not damage the walls, which on average are only 1 mm thick[1].

In contrast to the arteries, veins have thinner walls and are therefore more flexible. These properties arise from the low blood pressure within veins, causing the blood flow to be much slower. A further characteristic of veins are the valves they contain, which are made from endothelium tissue and restrict the blood flow in one direction[1]. Valves contain of two cusps that only open into the direction of blood flow due to pumping of the heart.

This is especially important regarding their function, as this is to return deoxygenated blood to the heart. The main two veins doing this are called superior and inferior venae cavae[1].

As the distance of the blood vessels to the heart increases, the amount of branching increases and the blood vessels become smaller and finer in order for the blood to reach every part of the body. Starting with large arteries, these blood vessels then further divide into little vessels called capillaries (0.01 mm in diameter). Not only the size decreases but also the thickness of the walls decreases to a layer of only one cell so that a maximum exchange of gases with cells and tissues can be achieved[1].

The capillaries carrying waste products away from the cells and tissues eventually enlarge into veins which carry the blood back to the heart[1].

The wall of the heart consists of myogenic muscle which is called myocardium. Just like all other tissues in the body, this muscle requires nutrients and oxygen which are supplied by blood vessels called coronary arteries. These originate from the right and the left artery which in turn divide from the aorta. Naturally, waste products must be removed as well which is done by the coronary sinus[1].

Inside the heart, hollow chambers can be found which are filled with blood and emptied again during each contraction cycle. The top chambers are called right and left atrium and receive blood from the body. They are located above the right and left ventricle respectively which pump blood into the arteries to the body. The upper and lower chambers are separated by valves and the right and left side are separated by the septum[1]. Valves allow blood to flow into the ventricles from the system during diastole and again closes during ventricular systole in order to avoid the blood flowing back when the heart contracts[3].

The muscle wall of the left-hand side of the heart is much thicker and stronger due to the fact that it has to pump blood into the whole system that supplies the body with blood and therefore has to supply more powerful contraction.

In order to control the contraction of all the different regions of the heart, there is also a network of ordered nerves and nodes. The sinoatrial node which is situated above the right atrium, constantly generates signals that travel through the right atrium by the atrioventricular node, causing a contraction. The signal then travels down the septum, along the sides of both ventricles via the bundle of hiss, into the bottom the heart. Here, this wave of excitation races through purkinje fibres up the walls of the ventricles, which causes a contraction. This arrangement of nerves means ventricles contract after the atriums.

This type of disease is caused by insufficient nutrient and oxygen supply to the heart muscle as a consequence of damaged or malfunctioning coronary arteries[1].

This disease is due to fatty deposits that lign and eventually clog the arteries, causing them to narrow and become inflexible. Sources of the fatty deposits are excess fat and cholesterol in the blood, which settles on the artery walls as the blood flows through. These deposits are then known as atheroma. These structures in turn form plaques as they start to accumulate. As these plaques build up, the lumen of the diseased artery narrows and consequently blood flow is restricted. In fatal cases, blood flow is not possible beyond the plaque, so blood supply becomes insufficient and body parts like the brain may suffer oxygen starvation can result in a stroke (also see Angina)[1].

Due to oxygen starvation, the heart muscle may be damaged over time (see Heart Attack)[1].

This type of condition is also called Myocardial Infarction and results from oxygen starvation in an area of the heart muscle where blood flow was restricted or lacking. The restricted blood flow results from blockage or narrowing of the arteries in the heart muscle (as described in Atherosclerosis) and leads to the formation of a blood clot or thrombus. The lack of oxygen and the accumulation of waste products then causes tissue death within this specific area of the cardiac muscle[1].

Symptoms of a heart attack are sweating, shortness of breath, nausea and loss of consciousness[1].