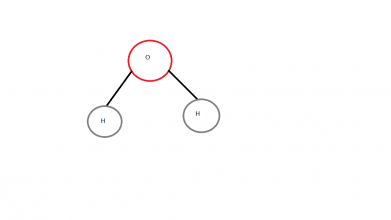 Each hydrogen atom forms a covalent bond with the oxygen. Oxygen has a higher electronegativity than hydrogen due to its two lone pairs of electrons. This causes a region of slight negativity (although not enough to create an ion) on the oxygen compared to the hydrogens. This spatial imbalance of electrons is represented by delta negative (δ-) on the oxygen and delta positive signs (δ+) on the hydrogen atoms[1]. When water molecules interact with each other, the positively charged region (hydrogen atom) of one water molecule forms a weak hydrogen bond with the negatively charged region (oxygen atom) of a second water molecule[2]. This is a hydrogen bond and although it isn't as strong as a covalent bond, it is highly stable and is responsible for the properties and thus abundance of water on Earth.

Water is a bent molecule there is a distribution of charge which is asymmetric. As a result of the charged regions in water, water is a polar molecule and can conduct electricity. Water molecules react with molecules in aqueous solution through the formation of hydrogen bonds and via ionic interactions. These interactions mean that water is a good solvent and can dissolve polar molecules and ions. Water has small molecules and maintains its physical state of being a liquid over a large range of temperatures.It is also highly cohesive. Networks of hydrogen bonds hold the structure of ice and liquid water together. These interactions are responsible for the cohesion of water. Water is involved in many different reactions and can affect several noncovalent bonds with its presence. Examples of noncovalent bonds that the presence of water can affect are electrostatic interactions, hydrogen bonds and van der Waals interactions (instantaneous dipole and induced dipole effects). Furthermore when water cannot react with nonpolar molecules through hydrogen bonding or ionic interactions, the result is the hydrophobic effect that is accompanied by hydrophobic interactions[3].

Humans contain around 40 litres of water and both unicellular organisms and multicellular cells live in water.

Many diseases are associated with water, for example excess water (hyperhydration), not enough water (dehydration) and many microorganisms use water as a form of transport and spread through water, e.g. Cholera.

Thus, water is very essential for life and is considered as the universal solvent. It helps to dissolve substances like ions in our body and partakes in many chemical reactions within the body, even to its cellular level[4].