DNA consists of two types of bases namely; Purines and Pyrimidines. There are two types of Purines: Adenine and Guanine as well as two types of Pyrimidines: Cytosine and Thymine . In the Watson-Crick DNA base pairing model a Purine always binds with a Pyrimidine, however, each purine binds to one particular type of pyrimidine. 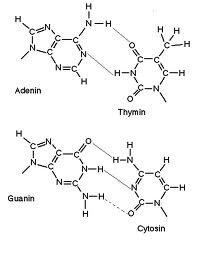 Watson-Crick base pairing is of very great importance as it is a deciding factor in DNA Replication.[2] It ensures that pairs form between complementary bases only. The formation of base pairs between two non-complementary bases results in gene mutations which can be detrimental to development of an organism.