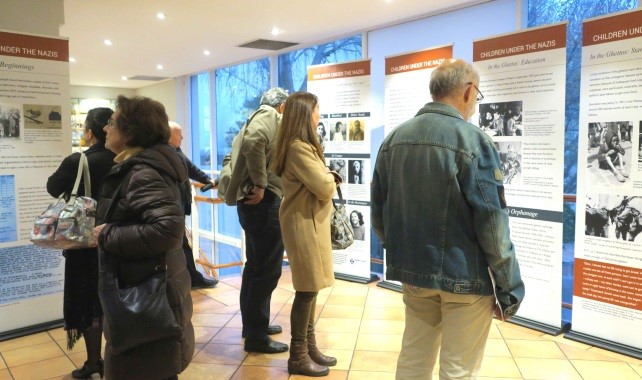 This exhibition was curated by Dr Beate Müller (Newcastle University) in collaboration with the South African Holocaust and Genocide Foundation. It was first shown publicly in South Africa in June 2017, both in the Johannesburg Holocaust & Genocide Centre and in the Cape Town Holocaust Centre.

In ten panels, the lives of children from diverse backgrounds, living in different countries and experiencing highly divergent consequences of Nazi rule, are explored. The children range from Nazi youths to victims of persecution: Jewish children, the handicapped, and Sinti and Roma. What is unusual about this exhibition is that, wherever possible, the voices of the children themselves are represented through early postwar primary sources – their school essays, drawings, Holocaust testimonies, and photos. Rather than unfolding a chronological narrative, the exhibition is arranged thematically: there are panels on migration, evacuation, on children in the ghettos or in concentration camps, alongside panels on air raids, testimony, and new beginnings after the war.